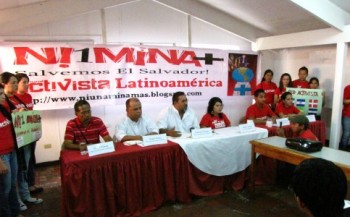 (Ottawa) Yet another anti-mining activist has been murdered in El Salvador. Canadian civil society organizations are calling for a full investigation into the murder of Juan Francisco Durán Ayala, the fourth such death in two years that local organizations believe are linked to the presence of Vancouver-based Pacific Rim Mining in the department of Cabañas.

On June 2nd, Juan Francisco Durán Ayala, a thirty-year old linguistics student at the Technological University in San Salvador, was hanging posters in the city of Ilobasco, in the department of Cabañas as part of a campaign against mining and Pacific Rim. The Cabañas Environmental Committee reported that the local mayor ordered municipal police to remove the banners and intimidate the activists hanging them. The next day, Juan left for classes in the capital city and was not heard from again.

Juan Francisco’s body was found shortly after midnight on June 4th. He had been shot twice in the head. When the Medical Examiner declared his body ‘unidentifiable,’ he was buried in a common grave in San Salvador. The following week, the Environmental Committee determined the whereabouts of Juan Francisco’s body, and on June 14th, Juan Francisco’s father positively identified his son.

This young activist’s murder comes two years after community leader and anti-mining activist Marcelo Rivera went missing. Shortly after disappearing, Rivera was found dead with signs of torture. That December, Ramiro Rivera and Dora Alicia Sorto along with her unborn child were also assassinated. In recent months, local journalists at Radio Victoria in Cabañas have received persistent threats. Francisco Piñeda, chair of the Environmental Committee and winner of this year’s Goldman Environmental Prize, now lives with around-the-clock armed guards to ensure his safety.

“The pattern of violence in Cabañas and the ways in which the presence of a Canadian mining company could be contributing or aggravating the situation is tremendously worrying,” says MiningWatch Canada’s Latin America Program Coordinator Jennifer Moore. “Not only have activists been targeted in El Salvador, people have also been killed in recent years in Mexico and Guatemala in apparent connection with Canadian interests. To leave those responsible for these crimes in impunity would give a green light for such violence to continue. We can’t stand by and let that happen.”

In September 2010, two gang members were convicted in the death of Marcelo Rivera. Since then, El Salvadoran organizations have continued to demand that those responsible for orchestrating this crime be investigated and tried, along with others responsible for perpetrating his disappearance, torture and murder. They also continue to seek further investigation into the deaths of Ramiro Rivera and Dora Alicia Sorto, and into the persistent threats and attacks against other activists.

“Juan Francisco was a front line defender for the right to water and a healthy environment,” says Emma Lui, Water Campaigner for the Council of Canadians. “We ask El Salvadoran authorities to carry out an exhaustive investigation regarding this string of murders in order to identify the material and intellectual authors and to hold them responsible.”

Opposition to mining and Pacific Rim Mining’s project in El Salvador has arisen out of particular concern for the impacts that industrial gold mining could have on the tiny country’s water supplies. With a population of 6.1 million people, El Salvador is only slightly bigger than Lake Ontario and is largely dependent on a single watershed. Pacific Rim Mining is currently suing the government of El Salvador for $77 million dollars under the US-Central America Free Trade Agreement for having not granted it permission to bring its proposed El Dorado mine in Cabañas into production despite the company’s failure to meet El Salvadoran environmental requirements.

“This terrible news is further evidence that Canada’s voluntary corporate social responsibility policy for companies operating overseas is doing little to stem the tide of human rights abuses,” says Louise Casselman of Common Frontiers. “The Canadian government needs to start taking this situation seriously and implement a mandatory framework that will, among other things, ensure affected communities much needed access to justice in Canadian courts.”