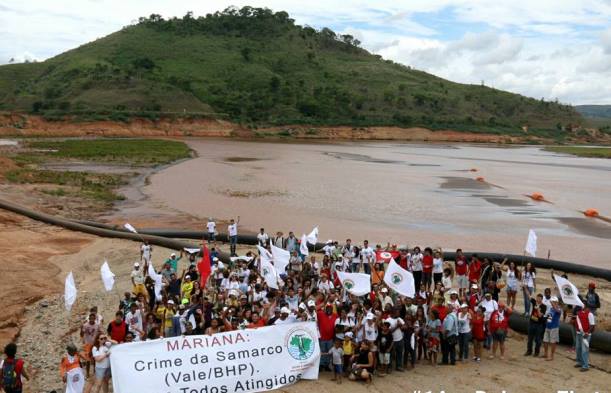 The Brazilian social movement of people affected by dams, MAB, repudiates the Federal Justice’s decision in suspending the criminal process against 22 people alleged to be responsible for the Fundão’s tailings dam burst, which killed 19 people and caused a forced abortion. The burst occurred in Bento Rodrigues at the district of Mariana in November of 2015 and contaminated more than 880 kilometers of the Vale River, affecting more than 1 million people.

Jacques de Queirós Ferreira, judge at the Federal Justice of Ponte Nova (state of Minas Gerais) conceded the defense argument which considers the phone tapping illegal. This decision benefited Ricardo Vescovi de Aragão, suspended president of Samarco; Ricardo Vescovi de Aragão, Kleber Luiz de Mendonça Terra, operational managers of the company; 11 members of Samarco’ Board of Directors and five representatives of Vale and BHP Billiton representing Samarco’s Governance, who respond to the criminal action. They are also accused for causing the flooding, collapsing and for the serious bodies injuries.

Shamefully, this decision is the only answer that Justice gave to the people affected and the whole Brazilian society 21 months after the crime. It reaffirms the complete disbelief of the people with the Brazilian judiciary that acts in favor of the mining companies responsible for the biggest environmental crime in Brazilian history. This decision sums with other juridical decisions which have benefited these companies. In March 2016, after a disagreement over the judicial jurisdiction, the criminal investigation conducted by the Civil Police was suspended, which delayed the investigations over of the facts. A year later, the defendants in the proceedings signed a Term of Collaboration with the Minas Gerais Court of Justice. Within this term the defendant assumed the responsibility of organizing the compensation process for the residents of Governador Valadares, affected by the water contamination. The conflict «mediation» within this Term is a fallacy since it is carried out in the offices of the defendants companies, restricting the access to justice for the families.

Less than a month ago, the judge of the 12th Federal Court suspended the Public Civil Action of the Federal Public Ministry (MPF), which, among other violations, questions the non-participation of those affected in the creation of the Renova Foundation, foundation which should compensate the damages caused; This weakens the power to pressure the defendants to comply with the reconstruction. Again, in this decision the judge ignores the position of the Public Ministry in the case, not accepting the request for the non-interruption of the criminal action.

Meanwhile, the mining companies advance in controlling all areas of discussion about repair in the Rio Doce basin, combating the organization of those affected and in any form of autonomy in the face of the political power of companies, in addition to insisting on the farce of the so-called «Social dialogue» that promotes the dispersion, the lie and the permanent justification of the delays in the actions of the companies.

Faced with the total partiality of the Brazilian Justice in times of coup d’état and destruction of rights, those affected throughout the River Doce reaffirm the commitment and understanding that it is necessary to organize by the base and promote mass mobilizations to ensure the construction of resettlement, a comprehensive environmental recovery, economic reactivation of communities, access to quality water in every area affected, fair compensation, among many other rights denied by Samarco.

Increasingly, the Brazilian judiciary demonstrates its distance from the causes of the people, proving its selectivity in law enforcement, even in the face of the greatest socio-environmental disaster in Brazilian history, which destroyed an entire basin. We, people affected by dams, believe that only the people organized in struggle are capable of guaranteeing justice and the realization of rights.

We will continue marching in defense for a world with more dignity, solidarity and respect.