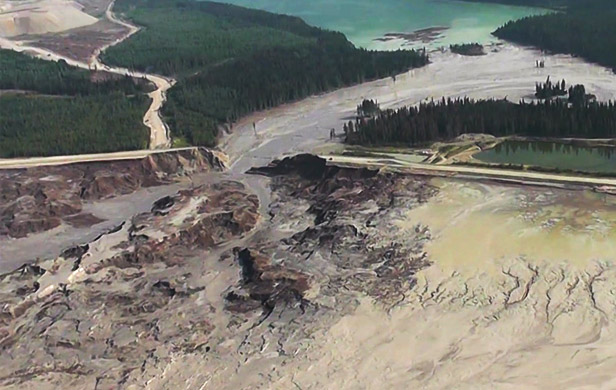 In January 2015, a Panel of independent experts released its findings from its investigation of the Mount Polley tailings dam failure, a modern impoundment that breached and released over 24 billion litres of solid and liquid mining wastes (tailings) into the surrounding salmon-bearing lakes and rivers. The full extent of impacts and damages caused by this massive failure are still being assessed and could last for decades.2 Overall direct and indirect costs are climbing in the hundreds of millions of dollars to date, in addition to a steep cost on the industry’s reputation and public trust.3

The Panel concluded that the dam failed because of a faulty design that didn’t account for the instability of the glacial till on which it was constructed. The failure and its effects were also exacerbated by unsafe operational practices, including storage of excess water in and on top of the tailings, as well as over-steep dam slopes. The Panel also concluded that the technology itself – wet tailings contained by large dams – was fundamentally and unacceptably dangerous.

The results of the Mount Polley investigation are of significant importance to mine management all across Canada for a number of reasons:

• Applying design, construction and safety standards developed specifically for tailings dams, rather than adapting those used for water retention dams.

• Permitting tailings facilities based on a bankable feasibility with a detailed evaluation of all potential failure modes and management for all residual risks, “including a detailed cost/benefit analyses of best available technologies for tailings and closure options, recognizing that the results of the cost/benefit analyses should not supersede BAT safety considerations.”

In the wake of the Mount Polley disaster and the Expert Panel report, the British Columbia government has called for an immediate investigation of the safety of all 123 tailings dams within the province, and recently appointed a Mining Code Review Committee to determine how best to implement the Panel’s recommendations. In the words of the B.C. Mine Minister Bill Bennett: “It is up to us to ensure that we take a leadership role in Canada and internationally to learn from the Mount Polley incident and do everything we can to ensure it never happens again.” 4 The potential for tailings site failures anywhere, including transboundary effects of upstream tailings spills, are also a concern, and the United States and international authorities are also being pressed for parallel commitments.5

Consequently, we urge all Energy & Mines Ministers to:

We look forward to your response and welcome the opportunity for a more detailed discussion on these matters.

Organized per province & territory (West to East), then per organizational name (alphabetical)

Chair
Ontarians for a Just and Accountable Mineral Strategy